The authors of this Blueprint conducted an online survey of municipal government officials in January 2019 with the goal of finding out information regarding the current state of the municipal IoT deployments. (The survey was conducted online and received 37 responses from verified government officials with a breakdown as follows: 73% City/Town; 13.5% Special District; 10.8% County; 2.7% State)

The results support the notion that government officials believe municipal IoT will be extremely impactful; an overwhelming majority of respondents (89.2%) agreed, “municipal IoT will have a significant impact on your organization now or in the future.” 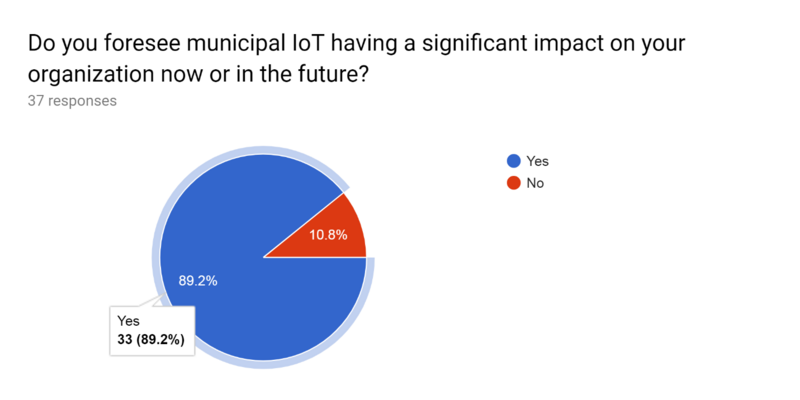 Further backing up this finding, the Center for Digital Government, in an article published on November 9 th , 2018 presenting data from its 2018 Digital Cities survey, cited that 92% of respondents of their survey stated that the “IoT is impacting city strategic plans,” representing a 50.81% increase from 2016 when the number was 61%. Regarding which functional domains/areas respondents felt will be impacted by municipal IoT, with the optional to select all that apply, the top four domains were, in order:

Notable from the survey was that many other domains also broke the 50% mark. This finding is consistent with the broad impacts of IoT laid out by the authors of this Blueprint in Section 1, suggesting that government operations across the board will be transformed when IoT networks and related systems become commonplace in government agencies. 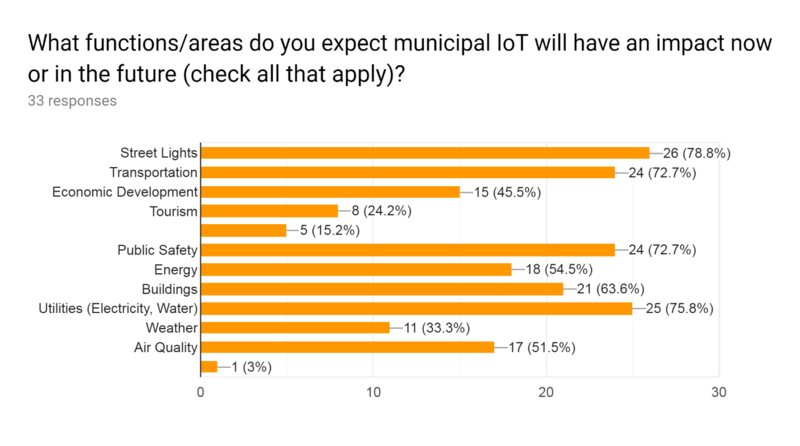 However, the data also suggest that IoT deployments at the state and local level are still far from reaching maturity, and as a market, are still in the emerging / early stages of the adoption curve. Regarding the current phase of IoT deployments, 63.6% of respondents of our survey stated their deployment was in the Consideration/Planning phase; 18.2% stated in the Pilot phase; and only 9.1% in the Project Phase.

Put another way, the vast majority of respondents, 81.2%, respondents stated that they were only in the planning or pilot phases. This strongly supports the notion that Municipal IoT networks are not widely deployed at this time.

Finally, in terms of the timeline for deployment, the vast majority of respondents, a combined 84.9%, said their deployments will take place in 2020 or later (i.e., 2020, 2021, or 2022 and beyond). This supports the theory that the adoption curve for Municipal IoT will be long and drawn out, lasting for several more years – possibly a decade or more – before reaching maturity and mainstream adoption. For readers familiar with Rogers’ theory of innovation diffusion, we are still in the Early Adopters phase and far from “crossing the chasm” between the Innovators & Early Adopters and the Early & Late Majority, where a technology innovation is considered mature. 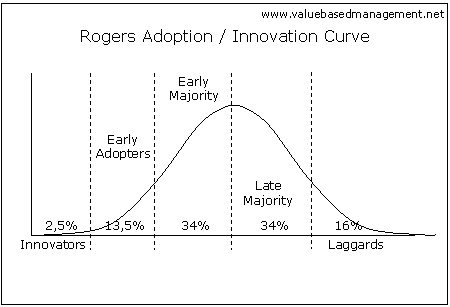 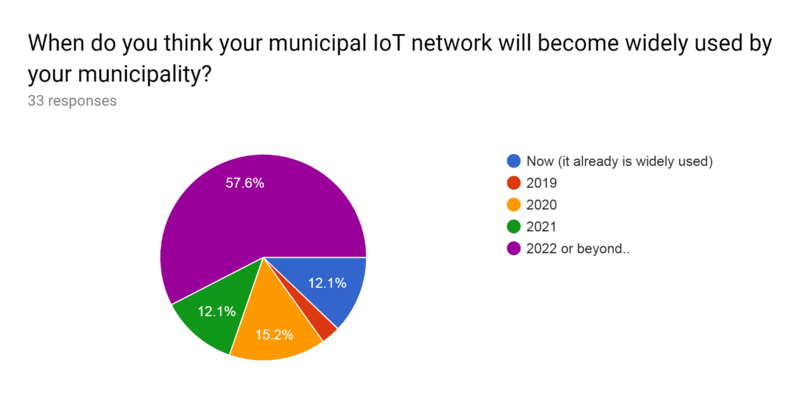 This is a process of innovation – governments, researchers, and their private sector partners are working independently and yet as part of an informal, collective system where knowledge is being created, shared, refined, and rewritten.

This research demonstrates that while it will take many more years to reach market maturity and fully realize the transformative potential of Municipal IoT, this transformation nonetheless already under way in the Innovators and Early Adopters stages.