The OMSI Consortium is soliciting subject matter experts and qualified vendors to participate in a series of short virtual workshops during the months of October-December 2020, culminating in a Q1 2021 Request for Proposal (RFP) to build a showcase integrated district infrastructure solution to serve the Oregon Museum of Science and Industry’s 23-acre site with the potential to develop up to 3 million square feet of new, low-carbon, mixed-use construction in Portland’s Central City Plan District. Workshop details will be released to confirmed participants.

In August 2018, the Oregon Museum of Science and Industry (OMSI), a 501(c)3 not-for-profit organization, selected a consortium comprised of Gerding Edlen (as the Master Developer), SERA Architects, Long Haul Capital Group, Urban.Systems, the Farkas Group (the “OMSI Consortium”) along with Amplified By Design to advise OMSI during the creation and approval of a city-approved master plan and execute on the development of the 11 acres of OMSI-owned land surrounding the museum. The OMSI District Redevelopment project is critical to the City of Portland’s 2035 master plan to turn Portland’s central city into a thriving, inclusive, and sustainable urban core while at the same time extending OMSI’s educational and innovation mission.

As one of the largest parcels available for development in Portland’s central city, the OMSI Redevelopment will anchor the southeast corner of ​ Portland’s Green Loop​ , a close-in circular corridor intended to serve and promote low-carbon lifestyles and commerce. The OMSI District Redevelopment will also anchor the Central Eastside Industrial District (“CEID”), one of twelve distinct neighborhoods that comprise Portland’s Central City. The CEID is bordered by the Willamette River on the west, SE 12th Avenue to the East, Interstate 84 to the North, and Route 26 to the South.

Left underdeveloped because of its industrial legacy: geographic separation due to topography, highways, and rail lines; and OMSI’s parking needs, the OMSI site still retains good connectivity to the city. The site maintains street grid access to the north and southeast, while the adjacent multimodal transit stops and river pathways offer convenient pedestrian and bicycle access. The region's investment in the Tilikum Crossing Bridge, streetcar, light rail, and bus rapid transit infrastructure make the OMSI station one of the City's most transit-oriented​ . T ​ he site’s relative isolation has also meant that the existing sewer infrastructure needed for denser development is presently undersized, presenting an opportunity for more sustainable district-scale water treatment and reuse systems, rather than traditional water infrastructure solutions.

District-scale Utilities and the OMSI Redevelopment

OMSI and the OMSI Consortium are committed to demonstrating that new Central City redevelopment can achieve deep sustainability, social equity, and residential and maker space delivered across a range of affordability (i.e. market rate + multiple affordability tiers), all while generating fiscal benefits to OMSI and the City. At the heart of this demonstration is the hypothesis that the systems that deliver electricity, heating & cooling, water, and mobility services today are siloed, centralized, and inefficient, but that these systems can be integrated [both on-site, and with an area’s electrical distribution network for benefits to the community beyond the District] to provide higher-quality service at lower prices, all at net-zero carbon performance or better. This approach will include modular and flexible strategies, and agile methods to ensure district [and grid-interactive] systems can be operated, maintained, and where necessary, replaced to take advantage of evolving technology advancements.

This series of workshops is meant to explore best in class district infrastructure solutions within the OMSI District. At the heart of our approach is an integrated district-serving utility system that will focus on the “Core Four” overlapping subsystems, with base capacity built during the first phase of development and then extended over a 10+ year phased district redevelopment. The workshops will explore the optimal approach to design, ownership, and operations of integrated district systems. The Core Four subsystems are:

As appropriate, key elements of the district utility systems will be housed within a replicable facility we refer to as an “InfraCenter,” which may be co-located with the Center for Tribal Nations (see description below). In addition, all systems will be designed to contribute to the educational mission of OMSI, through exposed controls, equipment, and distribution networks that OMSI can integrate into its campus exhibits. Complementary district solutions, including urban habitat and food production, nutrient management, and data/IT solutions​ ​ will be integrated with the Core Four utility subsystems wherever possible. (See appendix for examples of potential solutions)

The developer and owner of these systems will be InfraCenters LLC, a joint venture created by OMSI Consortium members SERA Architects and Long Haul Capital Group. To ensure interoperability and to future-proof the OMSI District, all system elements will be required to expose common and open interfaces for integration within a district operating system. This “open-source” district integration platform is being developed by opencommons.org, a 501(c)6 not-for-profit. The system will be developed in accordance with the ​ IES-City​ framework supported by the National Institute of Standards and Technology (NIST) of the US Department of Commerce, American National Standards Institute (ANSI), US Green Building Council (USGBC), European Telecommunications Standards Institute (ETSI), Ministry of Science and ICT (South Korea), Telecommunications Industry Association (TIA), Italian National Agency for New Technologies, Energy and Sustainable Economic Development (ENEA), and the European FIWARE Foundation. Urban Systems will productize this operating system, providing commercial support and integration with the district infrastructure.

The Center for Tribal Nations

Envisioned as an integrated package of one or more buildings, infrastructure, and riverfront restoration, the Center for Tribal Nations seeks to meaningfully restore Native Peoples​ ​ connection to the Willamette River watershed while modeling a new relationship focused on collaboration to promote innovative solutions to the shared challenges of sustainability, resilience, and inclusion shared by native and non-native peoples alike.

The Center concept is anchored by 21st-century office and community gathering space for Native people and tribal and intertribal organizations who live in, work in, or visit the Portland metropolitan region. With the assistance of a planning grant from the Metro Regional Government, currently in final negotiations, the Tribal community is scheduled to identify and begin planning for a robust mix of uses, such as ceremonial space for cultural and family events, an educational embassy accessible to the public for educational programming and people-to-people encounters, a commercial community kitchen, tribal retail and business services, dining, and child care. Modeling this new Tribal/non-tribal partnership, the planning will seek to incorporate traditional ecological knowledge into the broader OMSI District in two ways:

Definition of the “Tracks” 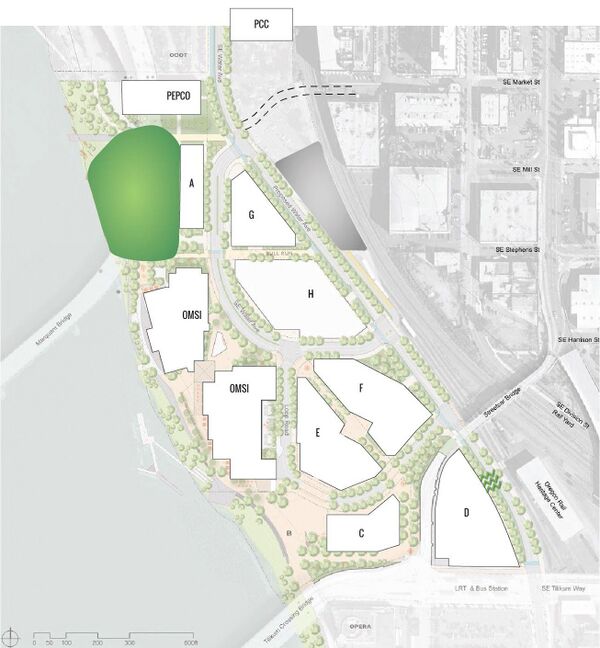 (Note: This is a preliminary brainstorm list - not all systems listed are expected to be incorporated into the final OMSI infrastructure plan)

The final report is in two parts, an OMSI Workshop Summary and an presentation deck.