The Small Donor Elections program seeks to reduce the influence of money in politics and encourage election of people to City office who are reflective of and accountable to all Portlanders. 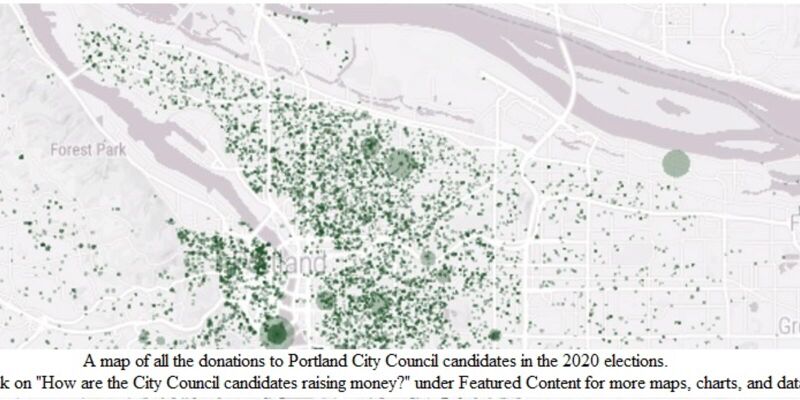 This is the main repo for the Open Elections project.

Check out our WIKI for information.

To get this repo running locally you need to have a few dependencies installed.

The frontend depends on the backend & database to be up and running in order to be worked on locally. If you want to have hot module reloading, during development you could use Docker with volumes, but starting the Docker services you need and running the node server separately, is likely simpler. Also checkout the [app](/api/Readme.md) and [api](/api/README.md) Readmes for more info. In general the following command will get all dependencies running with volumes in the foreground:

If you don't want to see local console logs from all running containers, you can add the `-d` flag to run in detached mode. See the Docker documentation for more info.

You can use the following commands to get up and running for frontend development locally:

If you're starting from scratch, you'll need to create a .env file

You'll need a `GOOGLE_GIS_KEY` in order for addresses to be properly geocoded for the public data visualizations.

Pull all the Docker images by running:

Build the Docker images by running:

We have a set of seed files located in models/seeds, to run them:

Use the following steps to run through the jest/mocha tests. You can see the what Travis, the CI/CD tool we are using, runs when a PR is opened against the `develop` branch in `./scripts/test.sh`. > Heads up: Make sure after each test you clear the Docker containers (`docker-compose [-f docker-file-name.yaml] down`) or you will probably get `Error: Request failed with status code 403`.

In the app directory, you'll have to install the app dependencies (outside of Docker)

cd app
yarn install
2. Then you can run the api in Docker
docker-compose -f docker-compose-test.yml up api
3. Run the Test Suites

If you encounter a particularly common or interesting issue, when trying to get the local environment working, feel free to add the problem / solution here.

If you're not sure how to solve a Docker issue, removing all created Docker containers usually is a good place to start:

This project uses Travis to Continuously deploy to qa.openelectionsportland.org on commits to develop. When you open a PR, Travis will run our test suite, and mark it as passing or failing on the PR at Github. When the PR is merged into develop, and the test suite is passing, Travis will deploy using scripts/deploy.sh