Meeting of the Minds

As the co-founder and CEO of OurStreets, I recently completed a three month odyssey, leading the OurStreets team in a rapid pivot to using our existing technology to serve the public during COVID-19. We have now repurposed our crowdsourced street safety app to instead help people source and share the availability of essential items, like toilet paper and hand sanitizer, so they can avoid unnecessary shopping trips during the COVID-19 pandemic. We called this effort OurStreets Supplies, and it’s a prime example of how civic engagement can be more than a response to a 311 request or hearing out a constituent in a community meeting. Civic engagement can simply be facilitating the ability for neighbors to help neighbors.

OurStreets origins are rooted in capturing latent sentiment on social media and converting it to standardized data. It all started in July 2018, when OurStreets co-founder, Daniel Schep, was inspired by the #bikeDC community tweeting photos of cars blocking bike lanes, and built the @HowsMyDrivingDC Twitter bot. The bot used license plate info to produce a screenshot of the vehicle’s outstanding citations from the DC DMV website. 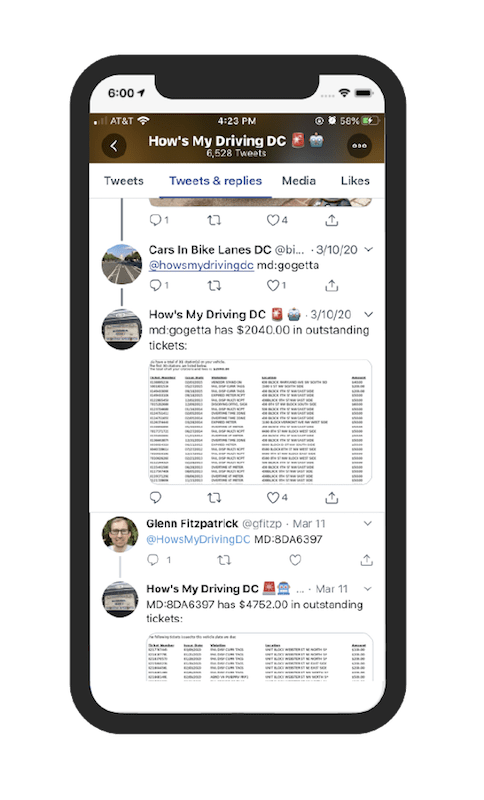 So how are these vehicles still on the road? It turns out that there is no reciprocity between D.C., Maryland, and Virginia for parking and speed camera citations. A Maryland driver can commute in D.C. every day, park wherever they like, and the most likely consequence is a ding on their credit score. Compare that to a D.C. driver, who must pay any outstanding parking or speed camera citations whenever they renew their vehicle’s registration.

@HowsMyDrivingDC and the underlying data collection effort shone a spotlight on this problem, and as a result, talks are ongoing between D.C. and the surrounding states around parking citation reciprocity. It later came out that D.C. is owed close to $1 billion in parking citations going back decades, so reciprocity could both help fund street safety programs and infrastructure, and allow citations to act as a true disincentive for dangerous driving behavior.

We started exploring how to turn the twitter bot into an app to capture even more meaningful data to impact change. After winning several pitch competitions and implementing a year-long beta test in the D.C. market that captured over 18,000 app submissions, we rebranded and launched OurStreets for Android and iOS in January 2020.

With a year of feedback from users and municipalities, we honed in on the problem that we were solving: how do we capture momentary obstructions of roadways, like cars blocking bike lanes and scooters blocking sidewalks, and use that data to make our streets safer for everyone?

… And on the other end was the D.C. Department of Public Works asking if we could repurpose OurStreets to crowdsource the availability of essential supplies during the COVID-19 crisis. Knowing how quickly we needed to move in order to be effective, we set out to make a new OurStreets functionality viable nationwide.

We went from ideating and wireframing over a weekend, to a full product launch in 11 days. This would have normally taken about two months of product development, but was done in less than two weeks. In three months, we had over 35k new downloads, and had supplies reported at stores in all 50 states and D.C.

We always knew that our Supplies effort would be temporary, and as supply chains have caught up and shopping habits adjusted, we recently made the decision to retire the feature in the OurStreets app. This decision falls in line with our values of capturing the data that most meets the needs of the moment and capturing information from the public that is actually going to impact change.

The lessons learned from OurStreets Supplies around civic engagement without direct municipal response are also embodied in OurStreets’ original mission of street safety.

A car blocking a bike lane for 30 seconds isn’t likely to get a ticket, but allowing residents to log that incident allows for transportation planners to use the data to make a change for a safer built environment. This process helps fill the gap between crash and citation data for a richer, data driven approach to both strategic enforcement and transportation planning.

This data has also become useful during the pandemic. I saw many anecdotal reports of more speeding in residential areas due to COVID-19 because of extremely light traffic. And we can prove it using OurStreets data. While OurStreets street safety reporting has decreased 75% during COVID-19 related stay at home orders, speeding reporting has stayed consistent across both periods. While none of these drivers will get speeding tickets, data like this can be used to prioritize slow street initiatives.

The bottom line is that cities need to be nimble, and it’s more important than ever that technology be the centerpiece for how civic engagement happens. We need to break the mold of the 311 residential request and municipal resolution for every aspect of city life. We need tools that can truly democratize how cities deploy their resources and help constituents interact with and help each other, making our cities truly sustainable and livable.

City Observatory COVID Lessons for Portland (and others) by Ethan Seltzer (. . . with profound thanks to anonymous reviewers) Editor’s Note:  We’re pleased to…

Ecodistricts Home A large bur oak graces my front yard:  with a double trunk, about 35 feet tall, she casts a shady and cooling radius…